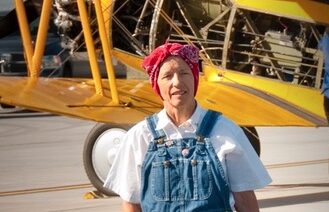 Colorado Humanities and Front Range Community College, Boulder County Campus are eager to announce a live, online event featuring Gail Beaton as Colorado’s Rosie the Riveter on March 8 at 1 p.m on Zoom in honor of and to celebrate Women’s History Month.

Rosie the Riveter is the name given to US women during World War II throughout the country who worked as welders, bullet makers, and at a wide variety of factory jobs vital for the war effort. During this program, you’ll learn about the character Gail Murphy, a bullet case worker at the Denver Ordnance Plant and other great contributions that women made to World War II efforts.

Gail Beaton presents women’s roles in history in a meaningful and in-depth way. For this portrayal, after doing research on the Denver Ordnance Plant, now known as the Denver Federal Center, Beaton explored antique shops on Broadway and developed the story and props.

Gail will present a 45-minute first person portrayal live via Zoom that will include a live conversation with the registrants. In the Chautauqua tradition, Gail will first take questions as the character, then answer questions as the scholar/actor. To register and receive the link, visit the Colorado Humanities Speaker’s Bureau webpage.